Disclaimer: My references to the writings of other people do not in any way imply that they share my views on this manner.  The opinions expressed here are my own and do not necessarily represent those of my family, friends, or associates.

Our family attended First-St. Andrew’s (FSA) United Church in London, Ontario.  I know my father was involved with various activities at the church, such as teaching Sunday school, but unfortunately I am not aware of any specifics.

Have more information about my mother’s contribution because I have newspaper articles and other documentation.

I have my mother’s 1953 drawing of First-St. Andrew’s in a scrapbook of her artwork and projects covering the circa 1935 to 1955 period. 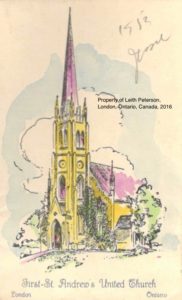 In November 2016, I attended the funeral of an old family friend in the sanctuary of First-St. Andrew’s.  It was nice to look up and see that the symbols are still present on the ceiling.

From the late 1950s to the early 1960s, Mom helped organize art and artifact exhibitions for FSA.  Some of these exhibitions were described in the pages of the London Free Press.

For example, in November 1962, The FSA United Church Women (UCW) presented a “Visual Worship” exhibition of “religious art,” which included works by “well-known artists from London and Toronto.”  In addition, members of the congregation, including the UCW, put together diaplays on the topic.  Further, there were a variety of ancient Bibles for attendees to look at.  A photo of the display convenor, Mrs. George Young, and my mother, the art-coordinator, examining the Bibles, appeared in both the London Free Press and the United Church Observer.

In November 1963, my mother was one of two art co-convenors of the FSA-UCW “Religious Art and Artifact” exhibition held at the church.  London Free Press columnist, Lenore Crawford, said the collection was “fascinating and worth hours of study.

My mother was involved with other programs and projects at the church, so what I have mentioned above is just a sampling.

In his eulogy, Rev. MacQueen described my mother as a “very special kind of person, full of courage, goodness and kindness.”  Four qualities stood out for him: her sincerity, selflessness, openness, and her encouragement of others.  I agree with Rev. MacQueen’s assessment.

In the late 1970s, my father, Charles T. Peterson, moved to Duncan, British Columbia, but when he returned to London in 1997, he started attending First-St. Andrew’s again.  His memorial was held there, April 4, 2007, with Rev. Dr. David McKane officiating.  Rev McKane was the FSA minister from 2002 to 2010.

On May 27, 2007, I held a celebration of my parents’ lives in Proudfoot Hall, in the basement of FSA.  The celebration included binders of archival material, display boards full of photos, and readings by family, friends and associates.  The approximately 53 people who attended provided me with lots of positive feedback.